Just putting it out there that there’s been a humdinger’ of a K1, YO, K2 happening  over here! Knitters spend a lot of time having love affairs with wool. The options are unremitting when surveying the myriad of kaleidoscopic yarns in the inner sanctum the Wool Shrine (aka your friendly neighborhood Wool  Repository). “Feel me! Buy me! Try me!” So much wool, so little time. Well the day job chomps its way into prime time knitting hours however there’s always nightfall, which in Winter-peg is currently 5:13 p.m. This is when yarn binging  generally occurs. These days I’m in ictus. In a transient state – as I am  memorized by a Noro yarn and can’t stop myself from recklessly knitting up a little sumptin’ sumptin’ .  I recently   discovered the “fagot stitch”. No guff this is what it’s called and frankly, fagoting can  rouse zeal in a knitter. There’s a beautiful rhythm to this stitch, primarily from the point of view of the continental knitter. I’m a speed daemon. I love it and quite frankly I’m hooked. I recommend a cupla’ mugs of Kick Ass Coffee to jolt you into high gear!

What will your bear be wearing when winter comes thundering in?

This sweet cardigan is knitted from Bamboo /Cotton. It can be made for 3, 6 and 12 month old lassies. How soft and squishy the bamboo is. It has 4 button holes. Still hunting down some cherry coloured buttons. May require a knitted cherry broach!

Such luscious merino, squish soft for baby’s head. Perfect to wear under the hood of a parka. Very fancy for the little lassie!

The All Dressed Up Bonnet

Made in a soft pale minty green. This hat will dress up even a pair of jeans and a hoodie or polish up a fancy ensemble [Please note that the similarities to the Toasty Bonnet -is simply a  considerably larger version sans the flo’ which could still be added but would be smaller.] Your honey bunny will be ready for Sunday or esteemed SaturDAY play-dates! Fits 1-2 year old Mademoiselle!

Cocoa Brown and pale celery could be worn by a boy or a girl. Super soft chunky wool. Would be great for a photo op’.

Pixie can be fashioned  in numerous fusions of colours! 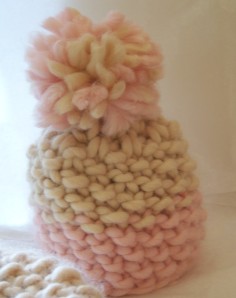 The ultimate in merino wool. Soft, supple, chunky and light. The softest cloud of wool for your little darling. Numerous colours available – from espresso brown to raspberry pudding to periwinke.

“I saw all these items, my dear Bunnies with my own eyes!” said Anna Acorn to the Coney Family. 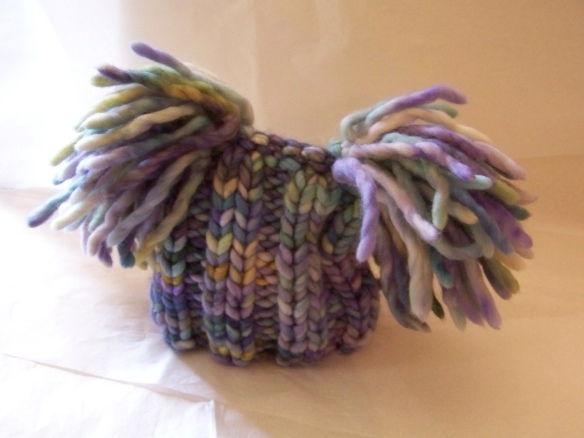 Froths of merino wool cascade around baby’s head. This hat can be made for babies 3 months, 6 months, and 1 year. It soft and luxurious. It is made of Malabrigo Kettle dyed wool in “rasta”. Its chunky but molds to baby’s head in a whimsical, jaunty fashion. I love knitting with this wool! 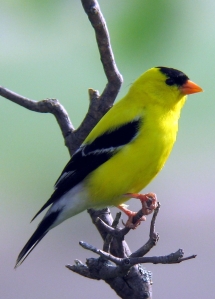 The Tale of a Yellow Bird

Two days ago my Papa, who is 85, told me a story about an intimate encounter he had with a beautiful yellow bird.

My Papa, who as I said is only 85, is still brazenly knee deep in gardening shenanigans. The enduring facts are this: my Papa was a busy man his whole life long. Owned successful businesses, farmed extensively and took pride in how his empire was built, which is to say, sweat equity was paramount. So to say he had been busy that day, in relative terms would imply that he was doing as much as he could as a man of 85 who was still managing to function incredibly well for his age and circumstances. And so there he had been tending to his spruce tree nursery and pruning raspberry canes and who know what else. Pacemaker and blood-thinners notwithstanding, he was worn out that day at that juncture. He decided to take leave of his regime and sit down and drink some water. Slowly he scuffled across the yard making his way to his chair on the porch. As he finally sat resting he suddenly felt that he was not alone. Next to him was a gigantic, yellow begonia which my mother had recently potted up and placed in a shady spot. A second glance of the begonia confirmed that upon one of its glorious blooms, there was someone, a fantastic  yellow finch had landed and was in a tranquil trance. It was stunning! and perfectly camouflaged by by the flora.

Papa concentrated on remaining utterly still as the splendid, yellow finch was only inches away. It looked about quizzically. It was apparently oblivious to my Papa’s presence. My Papa sat transfixed, captivated by his exotic visitor. Neither the bird nor the elderly man made a stir. The encounter stretched into a frozen, expansive moment. Papa sat calmly enthralled, encompassed in serenity, savoring this sublime poignant experience.

The bird was so wonderfully brilliant! It made an impressive departure from his recent toil through the saturated garden, from the previous weeks and days of relentless downpour.  He had struggled with his cane in the mud and swarms of mosquitoes had pestered him and finally had driven him out of the garden. He was exhausted. He needed to sit down and change his shoes and that was how he came to be sitting next to the finch on the begonia, on the porch. What magnificence ! He derived an unexpected peacefulness from this seemingly small moment. Utter tranquility seemed to radiate from his face as he recounted the  phenomenon to me.

My thoughts immediately turned to an earlier time that same spring. I’d had a similar encounter as  I was bustling about my garden, transplanting a Hosta at the foot of my Nanking Cherry tree. I had suddenly stood upright and there beside me, at eye level, on a pallid, rosy, frothy branch, a sweet little chickadee was perched and sweetly winking at me. I froze and dared not make stir. It was an intriguing, brief exchange. The Chickadee tilted it head, nodded its approval to me, and then was gone. I remember I remained standing there, motionless but a colossal smile was plastered on my face for quite some time until I suddenly simply laughed out loud. Instantly the word had become uncomplicated again. I promptly stashed it into my treasure chest of best experiences.

We need to stop and really see what is around us. Stop what we’re obsessed with accomplishing and observe then see then feel. 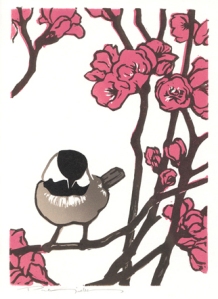 This blog offers a glimpse into at elegant, peaceful living between the hustle bustle of everyday life.

Sanity is living in the moment.  “Act upon” your whimsies and your hearts desire(s).  I implore you to work with your own unique pulse. March to the beat of you heart’s complex rhythm. Let no steal what is yours and yours alone – your thoughts and daydreams, your ideas and plans are owned by you! Set them free and see where they end up.

You have the receptors of a bumble bee and astute vision of  an eagle.

Soar high my friends and capture the elegance of the here and now!

My Papa, Karl and his brother, Herman, my Onkel, here on visit from Germany in 1995

END_OF_DOCUMENT_TOKEN_TO_BE_REPLACED

Zenith clicks on the blogroll

All things handmade or reclaimed

Gear and high tech clothes for the great outdoors